Chinese ancient money has a strong cultural attribute. Since the first emperor of Qin unified the currency system, Chinese coins have formed the custom-made "the outer circle and the inner square" and "the unity of heaven and man", taking it as the law of heaven and earth. It contains the cosmology and philosophy of ancient China, which is the embodiment of the ancient yin-yang eight trigrams theory. So. The casting of ancient money itself includes the unity of heaven, earth and God. 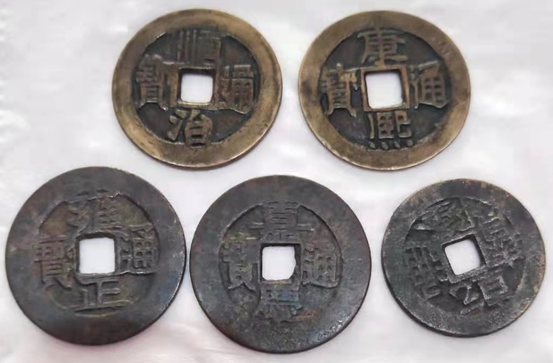 The Qing Dynasty is the last feudal dynasty in Chinese history, and also the second feudal dynasty established and ruled by ethnic minorities (Manchu) in Chinese history. The Qing Dynasty is one of the most prosperous and powerful countries in the history of China because of its vast territory and rich resources. The Qing Dynasty ruled China for 267 years from the establishment to the end of the Qing Dynasty. It can be seen that the reigning emperor at that time ruled the country perfectly. The small five emperors' money refers to the "Five Emperors' money of Qing Dynasty" - the ancient coins cast during the reign of Shunzhi, Kangxi, Yongzheng, Qianlong and Jiaqing. The five emperors have been in power for 180 years, which is the most glorious period of the Qing Dynasty. During the reign, the national power was strong and the famous "prosperous period of Kangxi and Qianlong" appeared in history.

"Five Emperors' money" is widely spread because of its auspicious meaning. Shunzhi, Kangxi, Yongzheng, Qianlong and Jiaqing are the same or homophonic with the auspicious words in traditional customs and culture, and are loved by people. For example, "Shun" in "Shunzhi" means smooth and successful; "Kang" in "Kangxi" means health and peace; "Yong" in "Yongzheng" means wealth and prosperity; the homophony between "Qian" and "money" conforms to people's desire for rich life; and "Jiaqing" means perfect harmony. Because of this, the people in the street are keen on collecting "Five Emperors' money", which represents people's pursuit of auspiciousness and beauty.

The coins of the five emperors are composed of Qianlong Tongbao, Shunzhi Tongbao, Jiaqing Tongbao, Yongzheng Tongbao and Kangxi Tongbao. The five emperors were prosperous in the Qing Dynasty. After hundreds of years of circulation, these ancient coins have been used by tens of millions of people. Compared with ordinary ancient coins, they have gathered the aura of the Chinese land, the spirit of the Chinese nation, the aura of the son of God, and the spirit of a hundred families. Therefore, it also has a very strong role in attracting money and protecting the body, which is precious and rare. This group of coins is handed down from the five emperors. The copper coins are uniform in rust color and complete in appearance. They are rare treasures and have great collection value and market value.